I am disappointed to post this article, but my intention to share information, to find and share the truth-even when it does NOT agree with me, over-rides my unwillingness to look at it. Like all Obama supporters, I WANT it to not be true-but like all political activists in America I KNOW in my heart that politics here is RIGGED far more than we may want to know about, and NO one gets into that office without being vetted by the elites and their agendas.

I had hoped he was playing along until he could make real changes, but my hope is fading as the second term moves along. Perhaps he too thought he could do so-and found out it was not as easy to defy them as it was for Kennedy (he DID accomplish some important changes before they shot him)

First we face the truth that our beliefs and hopes are not what we believed and hoped-THEN we MAKE THEM HAPPEN ANYWAY! Whether Obama works for them or us-he is ONE man. We are 350 MILLION (give or take based on the foolish division of the moment)

(with thanks to Thomas for sharing this with me) 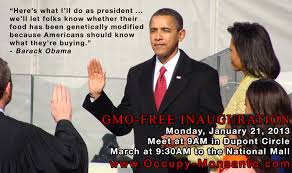 And when are anti-GMO activist groups going to stop saying they’re “shocked and disappointed” by the president?

Don’t you get it? Obama has never been on your side. He never deserved your trust.

Disappointment implies he was your buddy and then unaccountably walked away.

The man is a politician. He’s a liar. Different pols have different styles of lying. Some pretend they’re your friend before they screw you over and leave you in the dust.

After his victory in the 2008 election, Obama filled key posts with Monsanto people, in federal agencies that wield tremendous force in food issues, the USDA and the FDA:

As deputy commissioner of the FDA, the new food-safety-issues czar, the infamous Michael Taylor, former vice-president for public policy for Monsanto. Taylor had been instrumental in getting approval for Monsanto’s genetically engineered bovine growth hormone.

As commissioner of the USDA, Iowa governor, Tom Vilsack. Vilsack had set up a national group, the Governors’ Biotechnology Partnership, and had been given a Governor of the Year Award by the Biotechnology Industry Organization, whose members include Monsanto.

As the new Agriculture Trade Representative, who would push GMOs for export, Islam Siddiqui, a former Monsanto lobbyist.

As the new counsel for the USDA, Ramona Romero, who had been corporate counsel for another biotech giant, DuPont.

As the new head of the USAID, Rajiv Shah, who had previously worked in key positions for the Bill and Melinda Gates Foundation, a major funder of GMO agriculture research.

We should also remember that Obama’s secretary of state, Hillary Clinton, once worked for the Rose law firm. That firm was counsel to Monsanto.

Obama nominated Elena Kagan to the US Supreme Court. Kagan, as federal solicitor general, had previously argued for Monsanto in the Monsanto v. Geertson seed case before the Supreme Court.

The deck was stacked. Obama hadn’t simply made honest mistakes. Obama hadn’t just failed to exercise proper oversight in selecting appointees. He was staking out territory on behalf of Monsanto and other GMO corporate giants.

And now let us look at what key Obama appointees have wrought for their true bosses. Let’s see what GMO crops have walked through the open door of the Obama presidency.

ATryn, an anti-clotting agent from the milk of transgenic goats.

This is an extraordinary parade.

Obama was, all along, a stealth operative on behalf of Monsanto, biotech, GMOs, and corporate control of the future of agriculture.

He didn’t make that many key political appointments and allow that many new GMO crops to enter the food chain through a lack of oversight.

Nor is it coincidental that two of the Obama’s biggest supporters, Bill Gates and George Soros, purchased 900,000 and 500,000 shares of Monsanto, respectively, in 2010.

Records don’t show Monsanto or other biotech giants pouring a landslide of (visible) campaign cash down on Obama, relative to other large donors.

Goldman Sachs was Obama’s number-one $$ donor, and Goldman touts GM-crop commodity contracts, for both buys and sells; but Goldman has its fingers in every significant money pot from Nome to Tierra Del Fuego.

The “Obama riddle” is as plain as the nose on the face of Globalism. Monsanto’s agenda, to monopolize the world’s food supply, is essential to the Globalist blueprint. That blueprint ultimately aims for redistribution of food to the world from a point of Central Planning

As president, Obama has a sworn obligation to Globalism. His oath isn’t to protect the Constitution. Are you kidding?

Every recent president has had an overriding loyalty to Globalism.

Obama’s signing of the Monsanto Protection Act, making that corporation senior in power to the US court system, wasn’t an accident. It was taken in keen awareness of his duty to his Globalist betters.

You won’t, of course, see this disclosed on the evening news.

Here is a president who, like Bush, has no plans for a better world. Obama’s notion of “better” is tied up in the Globalist agenda:

An elite-run bureaucracy, promoting equality and justice, reduces all populations to a lowest common denominator, squashing freedom and prosperity.

Obama’s supporters will never learn the truth, because they’re blinded by the light, which they project on to the persona of the president.

Obama is aware of the con, since he triggered it, and he leverages it.

He’s all nudge-and-wink. “Yes, we’ll help you and you and you. Of course we will.”

He might help you if you make a declaration of dependence. Sacrifice yourself on an altar of despair and then you might earn the right to be fed.

Obama, while on the campaign trail in 2008, was promising transparency in government, was claiming that every person has the right to know what’s in his food (GMO labeling). But clearly, that was all cover and fluff. He was lying through his teeth and he knew it. He’d been vetted for the presidency, and he knew the job entailed joining Monsanto and the larger Globalist agenda as a front man.

He hasn’t changed over the past four years. He’s been a covert agent since the beginning.

Imposter. Charlatan. These words fit Obama. He’s pretended, like Clinton, to care, but he doesn’t. He doesn’t care that GMO food is taking over the country and the world. He wants it to happen. He’s always wanted it to happen.

The sitting president of the United States, Monsanto, DuPont, and Dow, among others, are prepared to do whatever is necessary to make GMO food dominate America.

They intend, through Monsanto-gene drift among millions of plants in ag fields, through increased planting of GMO crops, and through introduction of still more GMO crops, to wrap up the USA in genetically engineered food.

Obama is on board. He’s always been on board.

He is the GMO president.

If tomorrow, the Globalist Rockefellers of this world decided that all food grown in the US should be injected with Prozac, Obama would find a way to help.

Stop making excuses for the man. He’s not a victim of evil forces surrounding his presidency. He signed up for this trip with eyes wide open.

The author of two explosive collections, THE MATRIX REVEALED and EXIT FROM THE MATRIX, Jon was a candidate for a US Congressional seat in the 29th District of California. Nominated for a Pulitzer Prize, he has worked as an investigative reporter for 30 years, writing articles on politics, medicine, and health for CBS Healthwatch, LA Weekly, Spin Magazine, Stern, and other newspapers and magazines in the US and Europe. Jon has delivered lectures and seminars on global politics, health, logic, and creative power to audiences around the world.