Thank you for sharing this!

This is amazing! Thank you for taking the time to organize and share this information. Many settler people mean well but have no idea of the things you explain here.

Especially those of you who have an interest in Native American spirituality and religions. I know everyone is different but I was raised that the issues discussed in this article are fundamentally important to our spiritual reality.

Because I was taught that spirituality is not some separate fantasy but integral to each moment of our lives.

If you cannot respect others, all living beings and the Mother Earth and ACT on that every day then you are fooling yourself and living in the fake world.

To those who seek the path to spiritual growth thru Native spirituality this is imho a much more clear and true explanation of how to get there than any list of “totem animals”, or store full of feathers and soapstone pipes.

I believe we can all decolonize no matter where our ancestors lived. We need to develop respect, solidarity and support for one another as we all recover from the destruction of our peoples thru colonization.

If we cannot work together to build a new world rooted in ancestral wisdom and inter-relationship with nature then it is quite likely that the indigenous groups now on the front lines suffering and struggling against tar sands, fracking, mining and other resource extraction activities will be the proverbial canaries in the coal mine.

Every single time we speak publicly, or put ourselves out there we are always asked by other Indigenous Nations, settlers, and settlers of color: what can we do. We then go on to outline all the ways those who want to be potential allies can help us out in a tangible way, in a targeted way, and in a general way. Everyone takes notes, asks more questions, and seems really earnest. Then inevitably soon after something happens that we need to utilize these tools and reach out to our settler allies, guess what happens?! Not much. More understandably our indigenous friends and relatives who are resisting the forces of industrial occupation cannot usually leave their fight to join ours unless the situation is very dire. Yet settlers also seem to have problems with moving beyond the round dance rhetoric of the protest industry and…

Thank you for sharing this and introducing me to this writer! I’m still getting used to the idea that I can listen to radio shows online so usually don’t end up noticing most but this show consistently introduces interesting and important ideas, writers, activists, and music. I hope you will all click this one, check it out and share it. 🙂

Leanne Betasamosake Simpson returned to Indigenous Waves once again, this time to discuss her latest publication with accompanying recording, Islands of Decolonial Love.

Leanne Betasamosake Simpson is  Mississauga Nishnaabeg from the Alderville First Nation. She is a writer, academic and storyteller with a PhD from the University of Manitoba, and is the editor of Lighting the Eighth Fire: The Liberation, Resurgence & Protection of Indigenous Nations and This is an Honour Song: Twenty Years Since the Blockades (with Kiera Ladner). Leanne is the author of Dancing on Our Turtle’s Back: Stories of Nishnaabeg Re-Creation, Resurgence and a New Emergence (Arbeiter Ring) and The Gift Is in the Making, a re-telling of traditional stories, forthcoming Spring 2013 (Debwe Series, Highwater Press). Her first collection of short stories, Islands of Decolonial Loveis forthcoming from Arbeiter Ring Fall 2013.

Leanne Simpson – She Sang Them Home

Thank you for sharing this! I love that you made your explanation and predictions both positive and realistic unlike most predictions;-)

Thank you for sharing this! What a wonderful upbeat story. 🙂

UPDATED: at the end.

That what passes for recovery is, in fact, a redfinition of class lines, is becoming clearer to more Americans.

What is emerging is a landscape of an underclass increasingly deprived of pensions and other protections established in the first half of the 20th Century serving as indentured servants to an upperclass increasingly liberated from the constants of law, borders, and morality.

We offer two examples from close to home.

Why Google is Pissing Off San Francisco | Think Tank

Abby Martin with journalist and Salon writer, Natasha Lennard, discussing the activist movement against Google employees in San Francisco and where the growing frustration from city residents is rooted.

And then there’s this, about the hyperbolic whining of a Bay Area venture capitalist and it’s furtherance by Rupert Murdoch’s media.

Thank you for sharing these! What a lovely dose of light and colour to share with everyone . The gray dreary winter zone just now!:-)

An odd-looking rock appeared before NASA’s Opportunity Rover on Mars, in a spot where, 13 days earlier, there was nothing. 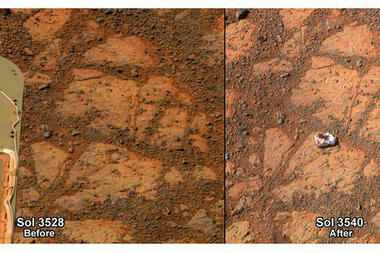 This before-and-after pair of images of the same patch of ground in front of NASA’s Mars Rover Opportunity 13 days apart documents the arrival of a strange, bright rock at the scene. The rock, called “Pinnacle Island,” is seen in the right image on Jan. 8, 2014. The image at left was taken on Dec. 26, 2013.

A mystery rock on Mars that suddenly appeared in front ofNASA‘s Opportunity rover may look like a tasty donut, but it is like nothing ever seen on the Martian surface before.

The strange Mars rock was spotted by Opportunity on Jan. 8 in a spot where, 13 days earlier, there was nothing. The rock, which scientists now call “Pinnacle Island,” is white on the outside, red in the middle and appeared after Opportunity had just finished a short drive.

“It looks like a jelly donut,” said Steve Squyres, the rover’s lead scientist at Cornell University in Ithaca, N.Y., during a recent NASA event marking Opportunity’s 10th year on Mars. “And it appeared, it just plain appeared, at that spot and we haven’t driven over that spot.” [Amazing Photos from NASA’s Opportunity Mars Rover]

The odd rock is located in a spot on “Murray Ridge” along the wall of Endeavour Crater where Opportunity is spending the Martian winter. A closer look at the rock using Opportunity’s robotic arm-mounted instruments revealed even more surprises.

“It’s like nothing we ever seen before. It’s very high in sulfur, very high in magnesium, it has twice as much manganese than anything we’ve seen on Mars,” Squyres said with excitement in last week’s Jan. 16 event. “I don’t know what any of this means. We’re completely confused, we’re having a wonderful time.”

(This intro is a reblog from CSMonitor.You can read the full article at the link below-

The new lunar month begins today at 4:39 pm EDT/ 9:39 pm UTC with the New Moon in Aquarius. The Sabian symbol for the month’s energetic theme is “people on a vast staircase graduated upward.” The symbol speaks of being in the right place at the right time, perfectly positioned. With this, our perspective is unique, but because we are part of a line (a continuum), we are able to access other perspectives from those at other levels.

There is a calm that comes from feeling like you are in the right place at the right time and everything is being taken care of. This month’s ruling Mahavidya, Matangi, brings a feeling of trust that immediately calms. Matangi was the first Mahavidya that I began talking about and it was this time last year. If you’ve been reading the reports since then, you will now begin your second experience (second instruction) with all of the Mahavidyas, starting this month with Matangi.

Matangi is not at all interested in being in the limelight, preferring to be active behind the scenes. Her interests lie with those who are marginalized. She offers the best comfort but she can be bawdy and raucous, too. Matangi’s energy is quietly in the background, almost unnoticed, until something piques her interest and she comes out with a deadpan comment, shocking insight, or double entendre. But if someone is being mistreated, she breaks bad and can cause a scene. So we are in good hands with Matangi. She takes care of little things so that life flows more smoothly and enjoyably. She is ultra-supportive, and we can trust that we are in the right place (on the staircase).

So this month’s energy is about being in place. Trust where you are right now and trust the direction things are headed.

(Note for astrologers: The exact degree of the New Moon in Aquarius is 10 Aquarius 55. Since 55 of the 60 minutes between the 10th and 11th degrees has already been “expended” or “discharged,” I look to the next degree, the 12th. The Sabian symbol cited above is for 12 Aquarius.)

By now, you will all have been well acquainted with these endless fluctuations of energy coming into your being, and we venture to guess that you have all in some way been able to access hitherto unexplored territory within. This may not feel as any major feat to some of you, as you have so far probably not been able to get but a small sip from that huge ocean of endless information that lies within, but still, we do think it has whetted your appetite for more. For more is to come dear ones, and it will come in fits and starts, in huge chunks and in tiny morsels, and probably when you least expect it to. For in this, as in everything else, trying to force your way forwards will not work very well, as it is by simply allowing yourself to let go of the need to…