I planned to do a nice detailed report on a lot of fronts but other issues were unfortunately calling my attention this evening; I couldn’t manage to get through my source materials, and now I’m dead tired. So this entry will be just a quick update instead.

The quick summary on the eruption and all of its connected components? Nothing is better, things are possibly worse, and more experts now agree on one thing: in all likelihood, this thing is just going to keep on pouring out.

Let’s not dance around things – time to dive right in. 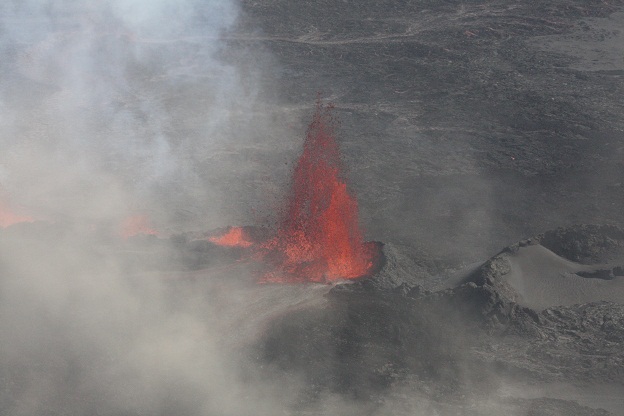 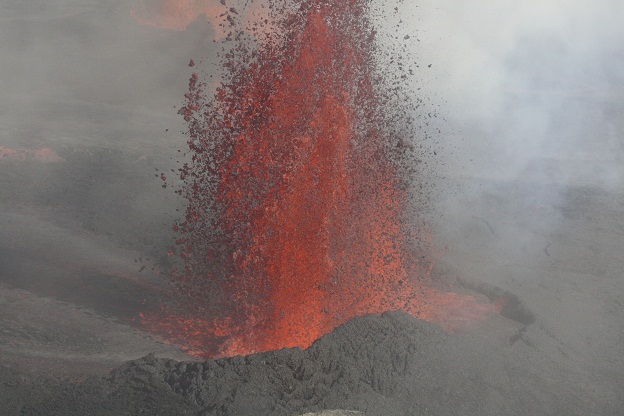 Activity in the eruption is reported to not be in decline, and the area of the flow has reached six square kilometers. The flow is still six kilometers from the main branch of the river Jökulsár á Fjöllum, but will shortly be / already is crossing smaller branches. This sudden water interaction can lead to steam explosions. At least three explosions have already occured (which are believed, but not yet confirmed, to have been from water interaction). There’s more recently been some unsual activity (sudden flareups and flaredowns) on the Mila feeds which might possibly be explosions. It’s hard to say at this point. At the time of writing, the cameras went from showing very bright to quickly showing absolutely nothing. Bad weather? I have no idea what the cause is. But they’ve been showing nothing for quite some time. The last reports on the lava fountains were that they were at times getting even taller, with reports as high as 200 meters (comparative reminder: the Statue of Liberty is 92 meters from the ground to the tip of the torch). I personally would want to see confirmation of that 200 meter figure before I accept such a large number, but needless to say, they’ve been at times quite large indeed.

Powerul quakes in record-setting abundance continue impact the caldera. Random quaking activity continues in the Askja system. Quake activity remains down in the dike, as the magma has an easy conduit out and no longer needs to break rock to do so. Scientists keep expressing concerns that the eruption could migrate south under the glacier or north into the Askja system. All of this remains unchanged from the previous day.

The consensus position of the scientists at the research organization ÍSOR is that this will most likely be a long, protracted event, for the same reasons we’ve been reporting here: that the magma appears to becoming from the deep reservoirs rather than shallow magma chambers. They also point out, as has been pointed out here, that the comparison with the Krafla Fires is erroneous, as this event has far greater volumes and influx rates of magma at its disposal. They however hold to the theory that Bárðarbunga is subsiding rather than inflating. They offer no explanation for the GPS readings or the depths of the quakes. They simply interpret the “roof” of the magma chamber as being 10 kilometers deep (abnormally deep for an Icelandic magma chamber), and the lack of quakes underneath is interpreted as the magma chamber being directly over another, even larger magma chamber. In their alternative interpretation of the situation, they still reach the same conclusion: that the quake storm could potentially lead to a major Bárðarbunga eruption. 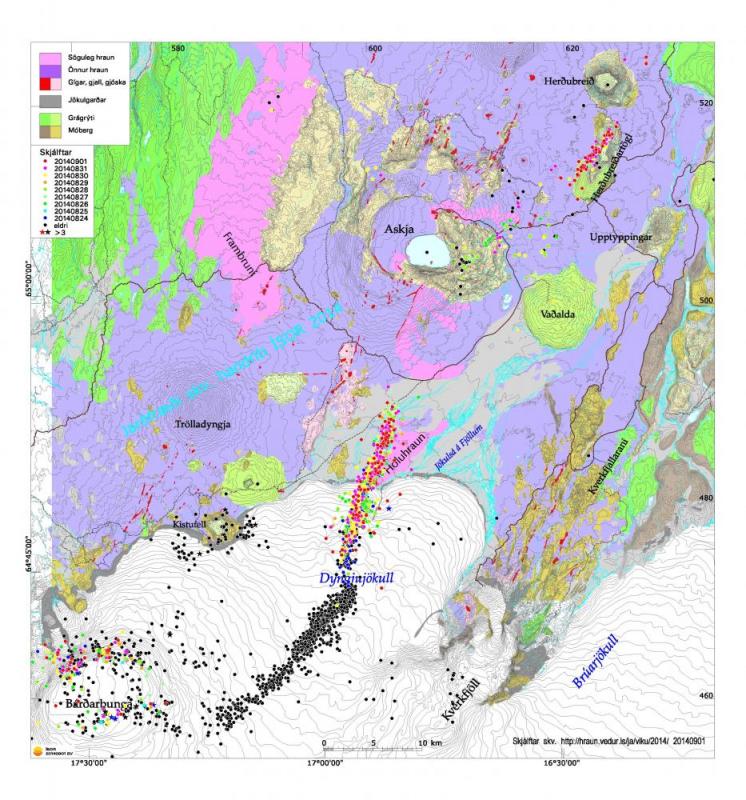 Now for the pictures: 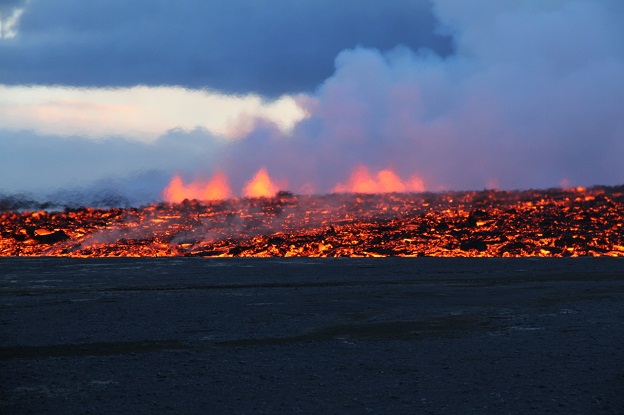 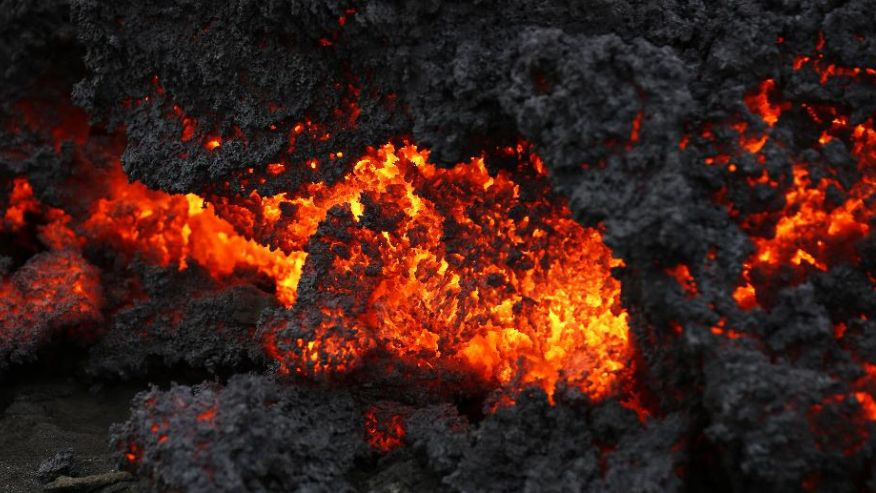 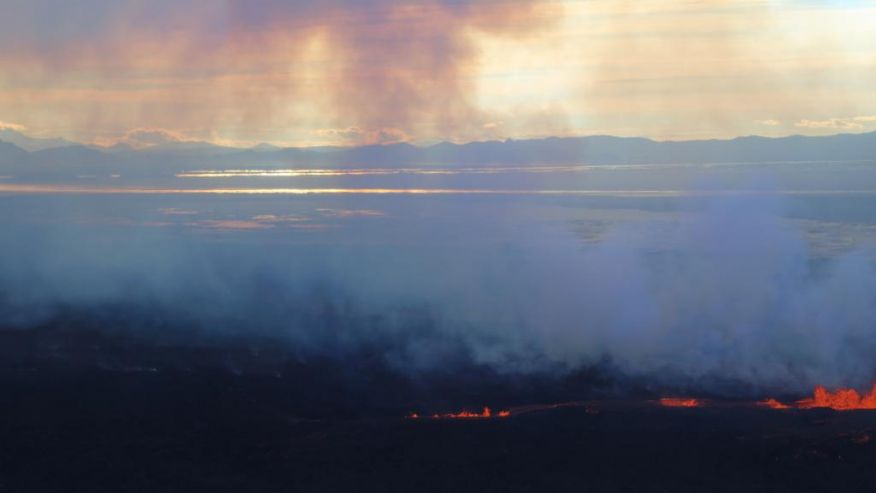 This below set from Einar Guðmann are some of the most beautiful I’ve ever seen. The small scale doesn’t do them justice, view them at full scale! And remember when you look at them: these eruptions are the size of skyscrapers, stretching out over a kilometer and a half, with a multi-square-kilometer lava flow. 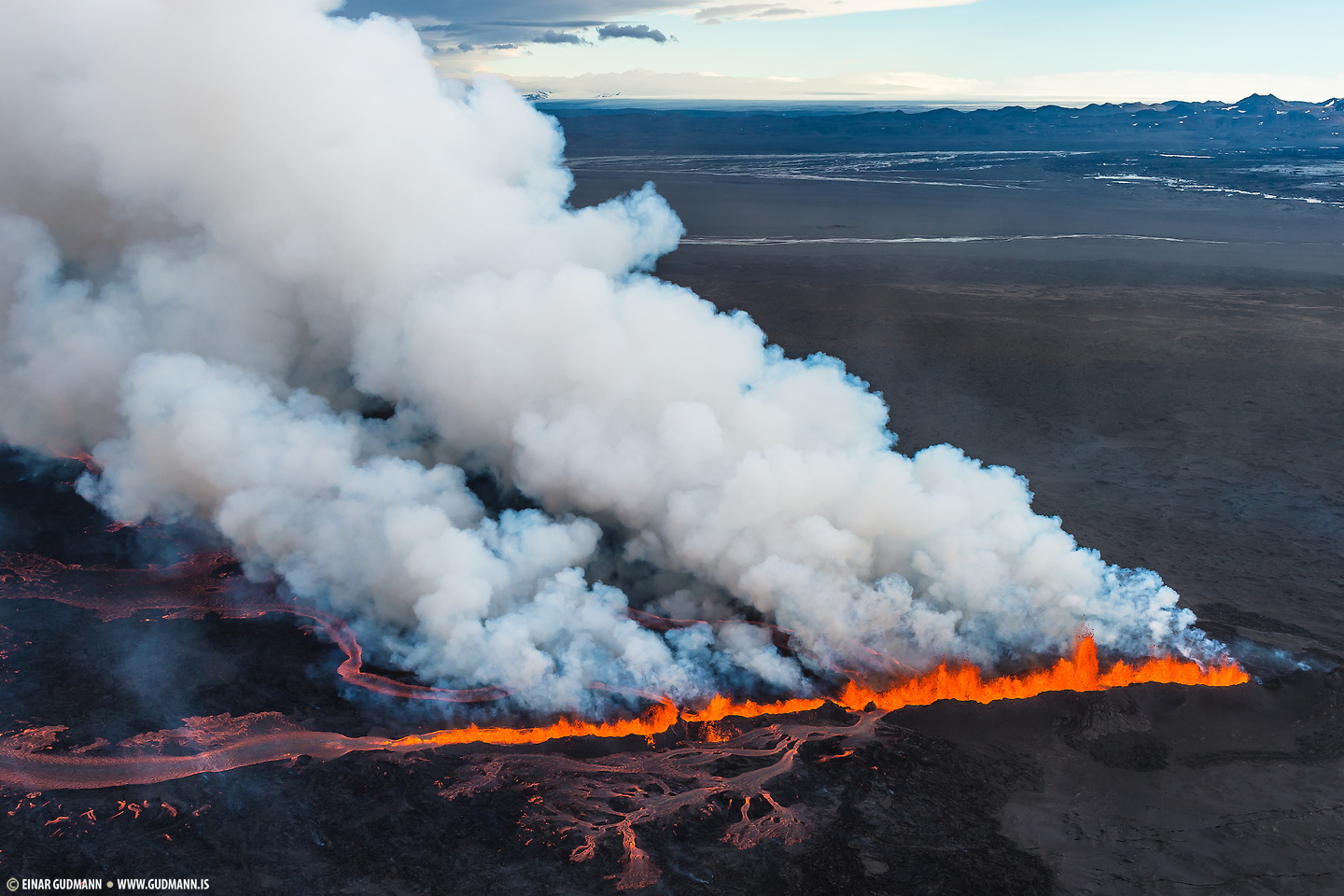 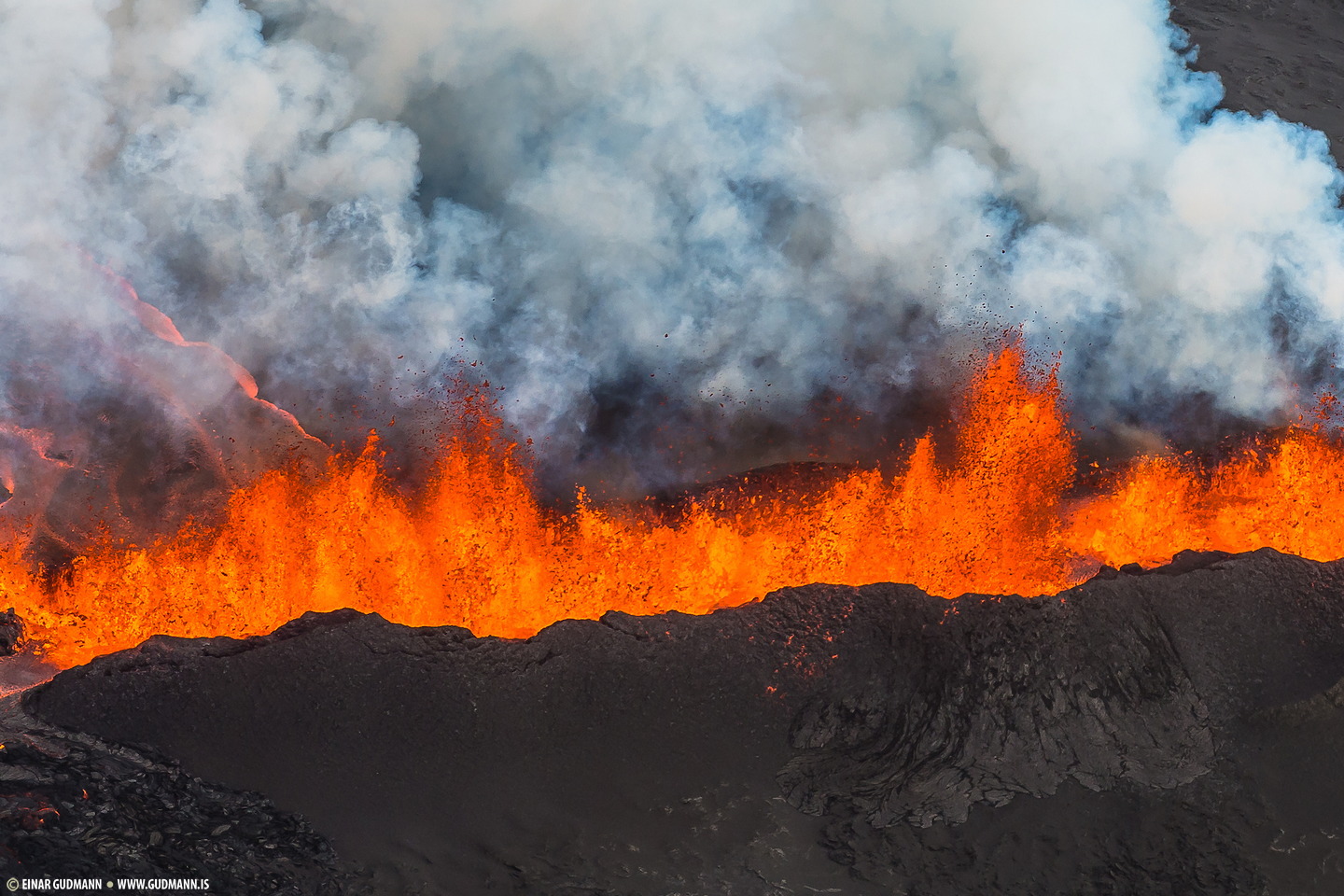 I have not yet received any data on the exact rate of gas emissions, but let’s just leave it at “very high”. As discussed in the news, reports are coming in that the sun in Egilsstaðir is showing up as a strange blood-red color. This is to be expected, that’s common when SO2 from volcanic eruptions is dense in the atmosphere above and was widely reported during the global climate-changing Laki haze – not just over Iceland, but much of the northern hemisphere. Egilsstaðir, while 100 miles away from Holuhraun, is the direction in which the clouds are currently blowing; in fact, the clouds now over half the way to Svalbard and northern Norway.

That’s all I have time for now. I’ll try to get some good updates during the day. Góða nótt!

Update, 13:00: I wrote an update this morning but apparently it didn’t submit or something. :Þ But just as well, because there’s some fresh news going on.

Reports just came in that there’s a sigdalur (“subsidence valley”) that’s formed in Dyngjujökull. I’m not sure what the best translation of that is – “graben”, perhaps, or maybe “rift valley”. But rather than being from a subglacial eruption, it’s believed to be due to such extensive rifting that the entire glacier above has started subsiding into the rift. We’re talking a rift that’s apparently up to 1 kilometer wide, according to seismologist Kristín Jónsdóttir. The depth of the new subglacial valley is at this point unknown. “This is spreading storm which we’ve been watching since 16 august, the plates moving in opposide directions. So we see this rift valley – Þingvelliris an example of a rift valley, naturally a very big rift valley.” The new rift begins approximately 2 kilometers past the terminus of Dyngjujökull.

This would explain the concentration of quakes in that area that I’ve commented on several times in the past. Updated for clarity: This does not mean that the plates have pulled a kilometer apart from each other; it means you have a slanted break on each side, and as the plates pull apart, the block in the center slides downward along the slant.

Back to the eruption. As I wrote before (but nenni ekki to take the time find links again), there has been a report in the decrease in fountain activity this morning (which corresponds with the view on the Mila cameras). Fountains are reportedly down to no more than 40 meters. However, this is not due to reduced input. Rather, according to Kristín, the outflow rates are now no longer matching the inflow rates, and as a result pressure is building in the dike again. There’s now an elevated risk of the eruption spreading to underneath the glacier or the dike extending northward again. The Met Office is now working on a fresh flooding risk assessment for the areas that could be hit by a potential jökulhlaup..

A number of roads, previously opened after the lava eruption reduced the risk of flooding, are reclosing. This was announced before the above news came out, so I’m not sure on what information that decision was made – but it’s definitely the right call.

The lava flows continue to expand. The largest “tongue”, to directly translate the Icelandic, now reaches 7 kilometers from the fissure. It grew 500-600 meters while I was sleeping, 400 meters wide. This “tongue” is moving to the northeast, although there are other tongues in different areas. There’s a good diagram of the day-to-day growth here. These tongues are dominated by the large rivers of slow-moving magma which you can see in the photos posted yesterday.

Eruption rates yesterday were estimated to average 100-150 cubic meters per second, slightly more than the day before. The total area of the flows is now 7.2 square kilometers. Gas emissions continue to flow east-northeast, in the direction of Egilsstaðir. The most recent composite satellite SO2 image just barely missed Iceland but caught a large chunk of the emissions on their way to Svalbard.

A 5.5 magnitude quake struck in Bárðarbunga’s caldera last night, among others. This is the second most powerful thusfar. There have now been 13 quakes over magnitude 5 since the event began. The Met Office should seriously consider extending the height of their magnitude scale; quakes greater than magnitude 5 normally happen only once every year or two, but here they’ve been happening daily.