Another interesting report from the Icelandic volcano with the bottomless pit of lava reserves; -) I love how this author distills so much information into a brief article. Lots of pictures-and several videos you will have to click through to Daily Kos to view.
Blessings,
ohnwentsya

Hey – have you hear the one about the eruption on Holuhraun that’s erupted 300 million cubic meters of lava over a couple dozen square kilometers at a rate of 100-200 cubic meters per second, then went on the decline, to the point that at least one scientist was saying a couple days ago that it would probably die off in a few days?

Oh, you’ve already heard that one? Okay, I’ll give you one of Bárðarbunga’s new jokes, relayed intoday’s scientific report.

Q: “Why did Iceland’s largest active volcano create a 50 kilometer dike to Holuhraun?”

Yeah, she’s a real laugh riot. Let’s do the breakdown on today’s Eldfjallavakt.

Today’s top story: the eruption on Holuhraun has had a much higher output than had been previously thought. That is, 2 1/2 times higher.

Compared to other well known lava eruptions, this is quite sizeable. Kilauea produces about 5 cubic meters per second; the current eruption on Holuhraun presently produces more lava in a week than Kilauea produces in a year. The eruption has produced more lava and in a shorter period of time than Mauna Loa’s famous 1950 eruption, and has already produced 3/5ths the amount of lava as Mauna Loa’s bigger eruption that began in 1872 which took five years to complete. Hekla’s 1947 eruption was roughly that size as well, and took 8 months to complete – an average flow rate 1/8th of the current eruption’s. Þorbjrgarhraun is now bigger than all of the other Icelandic lava eruptions in the past 150 years. Surtsey was only 400m km³; Heimaey, 230m; Krafla (everything together over 9 years), 250m. The list only goes down from there. Yet despite this amazing flow, pressure is not dropping, it’s actually building.

But it’s not the simple stats that make it impressive – it’s that it’s not doing this with some easy route through the caldera. The volcano is doing this through a 50 kilometer long dike (the distance from downtown Philadelphia, PA to Wilmington, DE) that’s only approximately 3 meters wide, not counting the vertical movement necessary to reach the surface. By contrast, an eruption in the caldera would require only vertical movement, about 9 kilometers, and has the potential for an orders of magnitude larger “gap” to erupt through than a three meter crack. 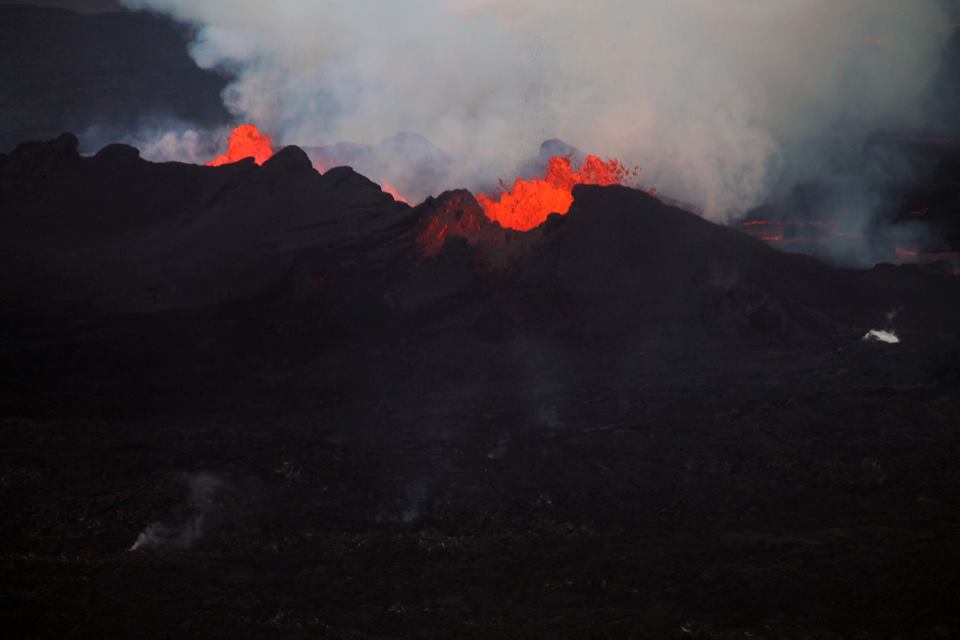 Flow rate: 250-350 cubic meters per second is similar to the flow rate of the Colorado River below Hoover Dam.

Volume: 400-600 million cubic meters (0,4 to 0,6 cubic kilometers) is approximately 200 Hoover Dams worth of material. Of course, that’s smaller than the estimated cubic kilometer in the dike, and (roughly) a few hundred cubic kilometers in Bárðarbunga’s magma chamber. Thankfully, most of that magma will never come out. Unfortunately, we have no clue what percent will.

Thickness: Currently about 30 meters thick (height of the Statue of Liberty, including the pedestal) near the 60-70 meter craters; commonly 18-22 meters thick in the middle; and with an overall average of 14 meters thick.

Let’s take a look at the lake (which for want of a name we’ll call Þorbjargarvatn): 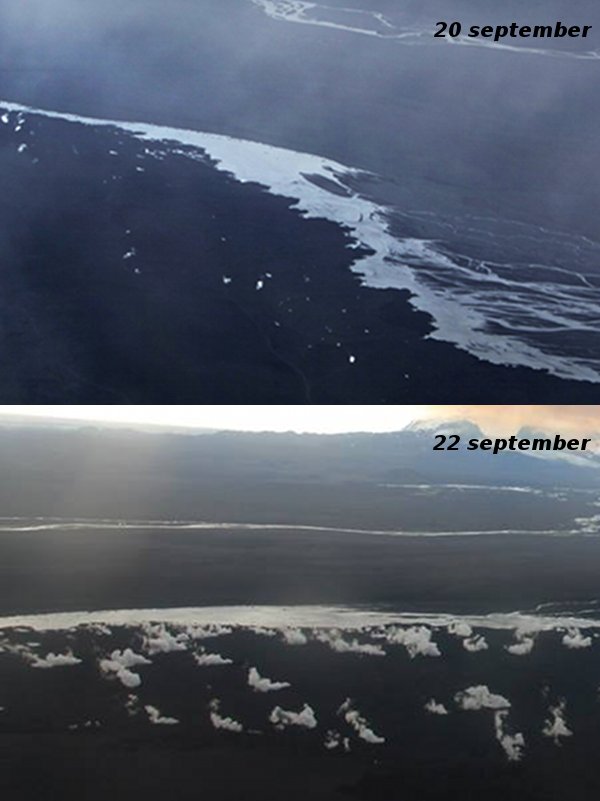 It’s hard to tell from this angle, but it appears that the surface has elevated by half a meter or so – the island seems to have receeded (especially on the east (left) side) and water looks slightly more backed up into the side streams. But again, it’s hard to tell from that angle. It shouldn’t be a daily water height variation, that’s only been about 20 centimeters just downstream. 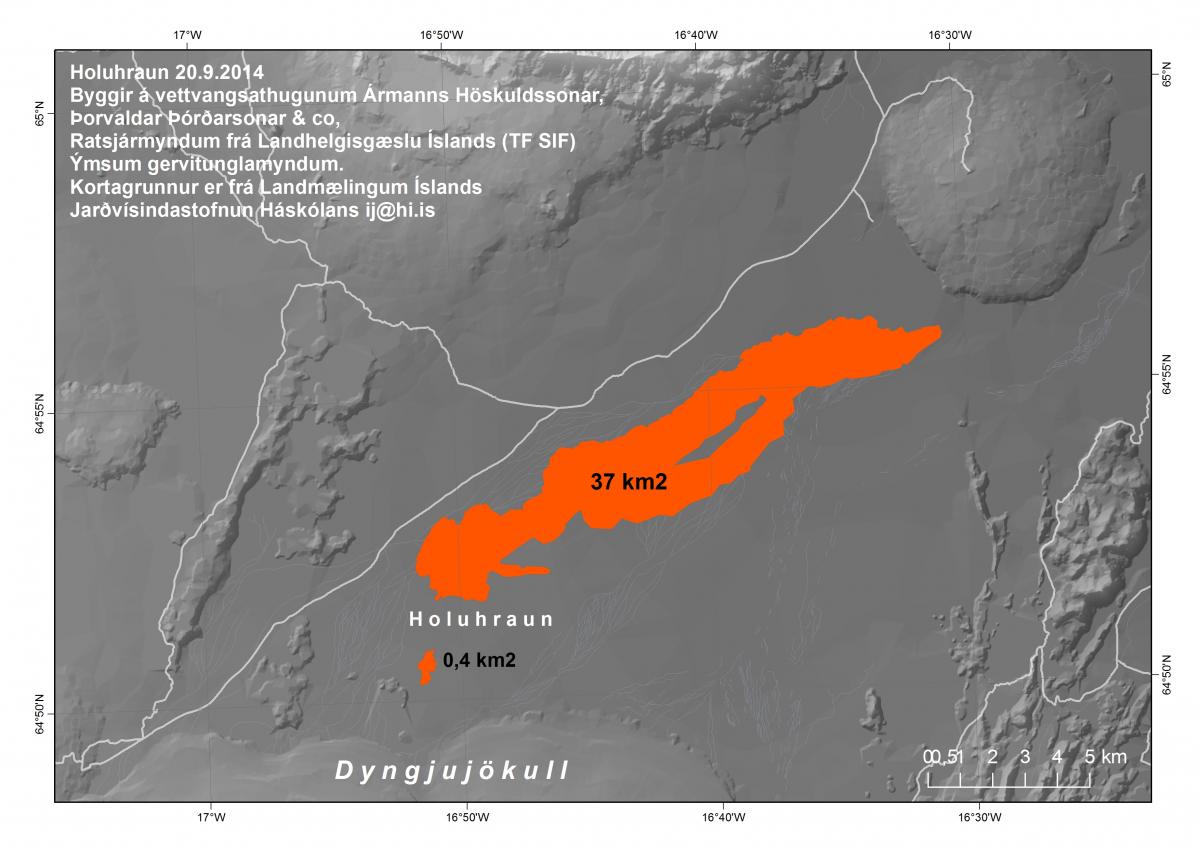 You can see the new lava tongue that has spread on the south side and rejoined the main flow; this and the old flow form the north-northwest bank of Þorbjargarvatn. As for how the lava is going to behave now that the two branches have re-intersected, I do not know.

While there are lots of little plumes coming up from the flow, these are largely just steam; despite its great expanse, only 10% of the toxic gases are coming from the flow; the other 90% comes from the craters. 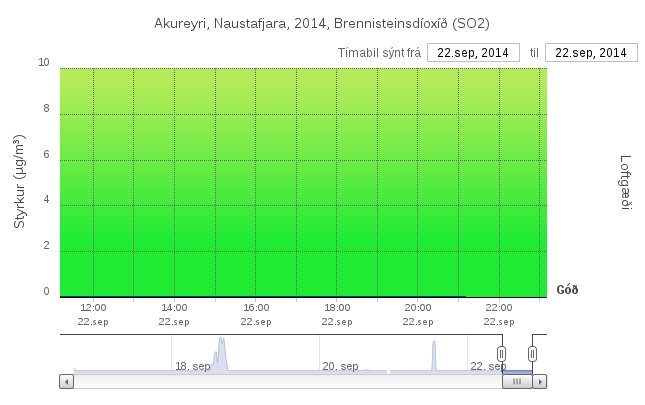 If you have bad data, don’t try to hide it by zeroing it out – either mark the data as bad in the graph or take the meter offline. Or if it’s a problem of a margin of error, mark your margin of error like the caldera subsidence graphs are so kind to do: 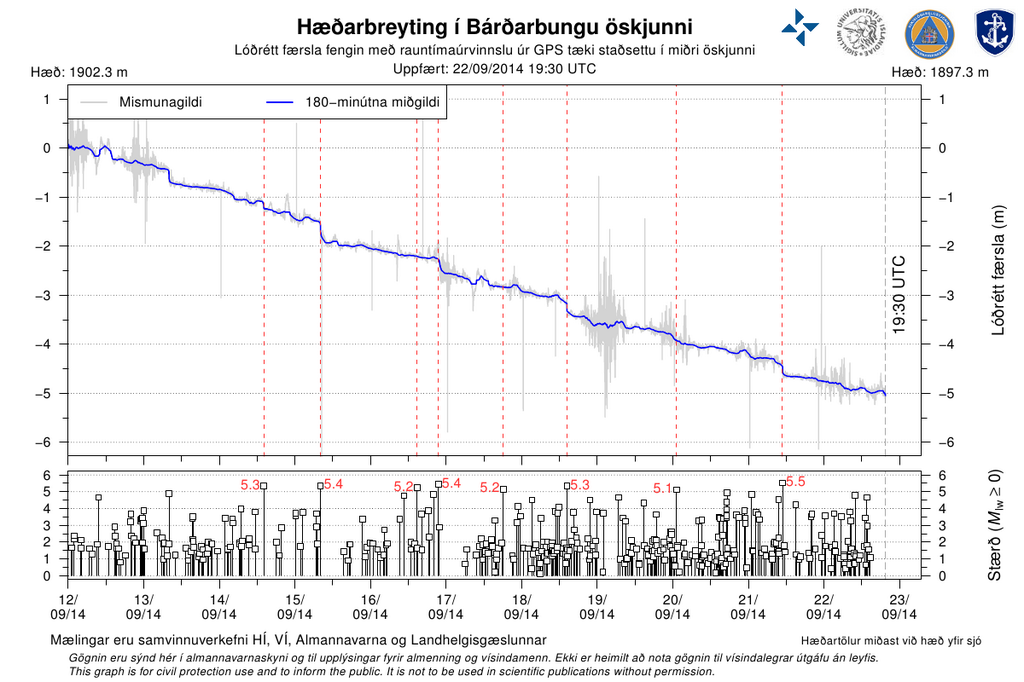 Note the five meters of subsidence since the meter was placed on the glacier.

You know the old Jack Handey quote… “If you ever drop your keys into a river of molten lava, let ’em go, because man, they’re gone”? Well, the same applies to geologists and their cameras. I like how they labeled their own action as “Fail” 😉

When the winds calmed the other day, a large amount of “airborne particulate matter” deposited on the glaciers, making their surface textures unusually visible: 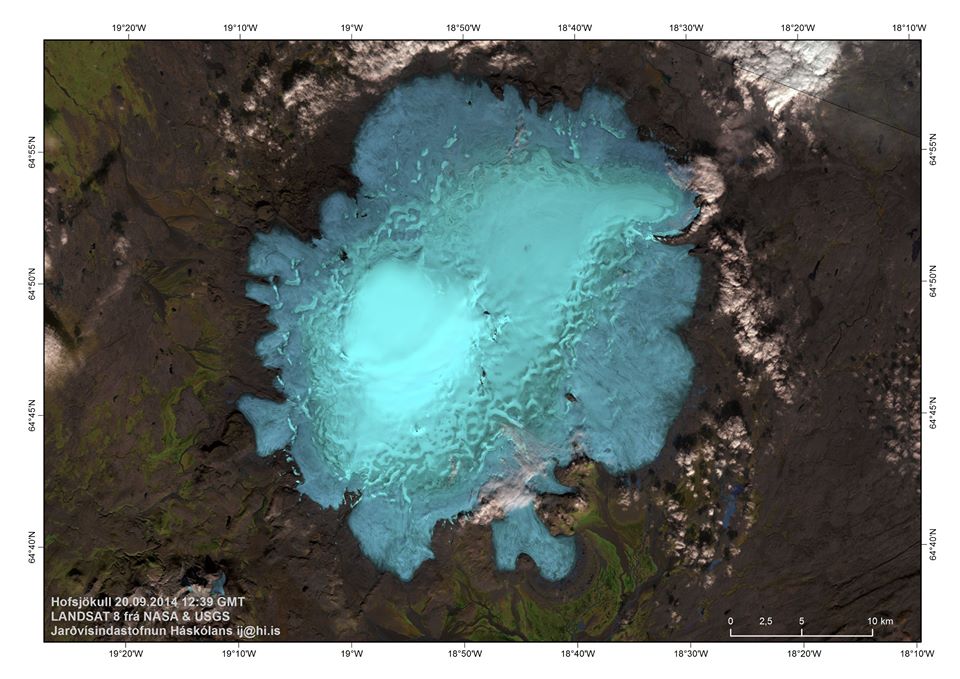 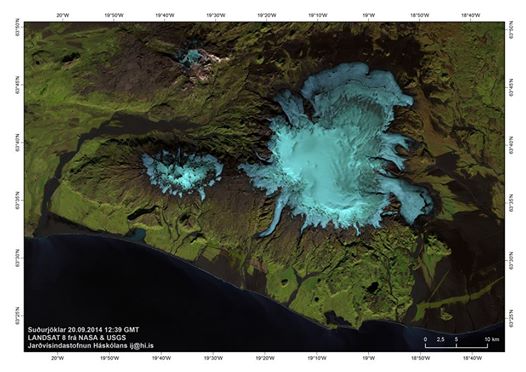 Given how Iceland is no stranger to wind and yet this is no everyday occurrance, I can’t help but suspect that this is from the eruption, either directly (small amounts of superfine ash) or material kicked up by a volcanic firestorm. 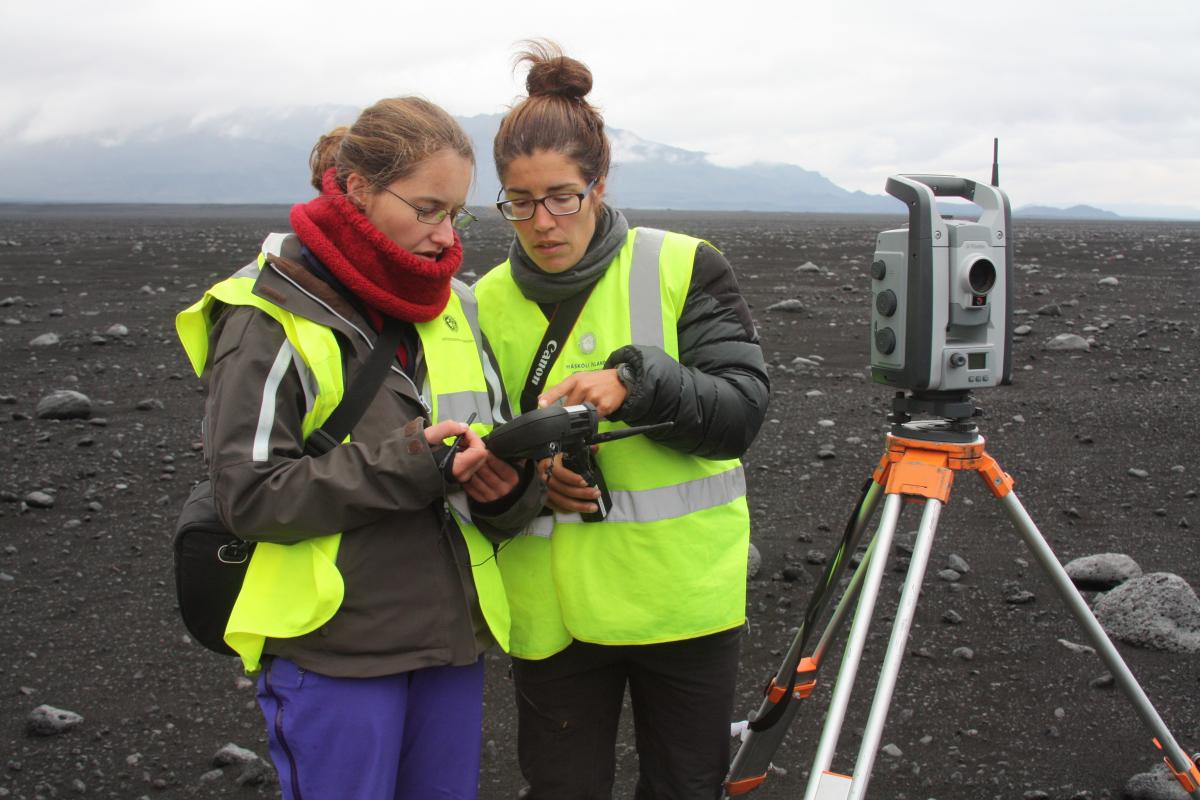 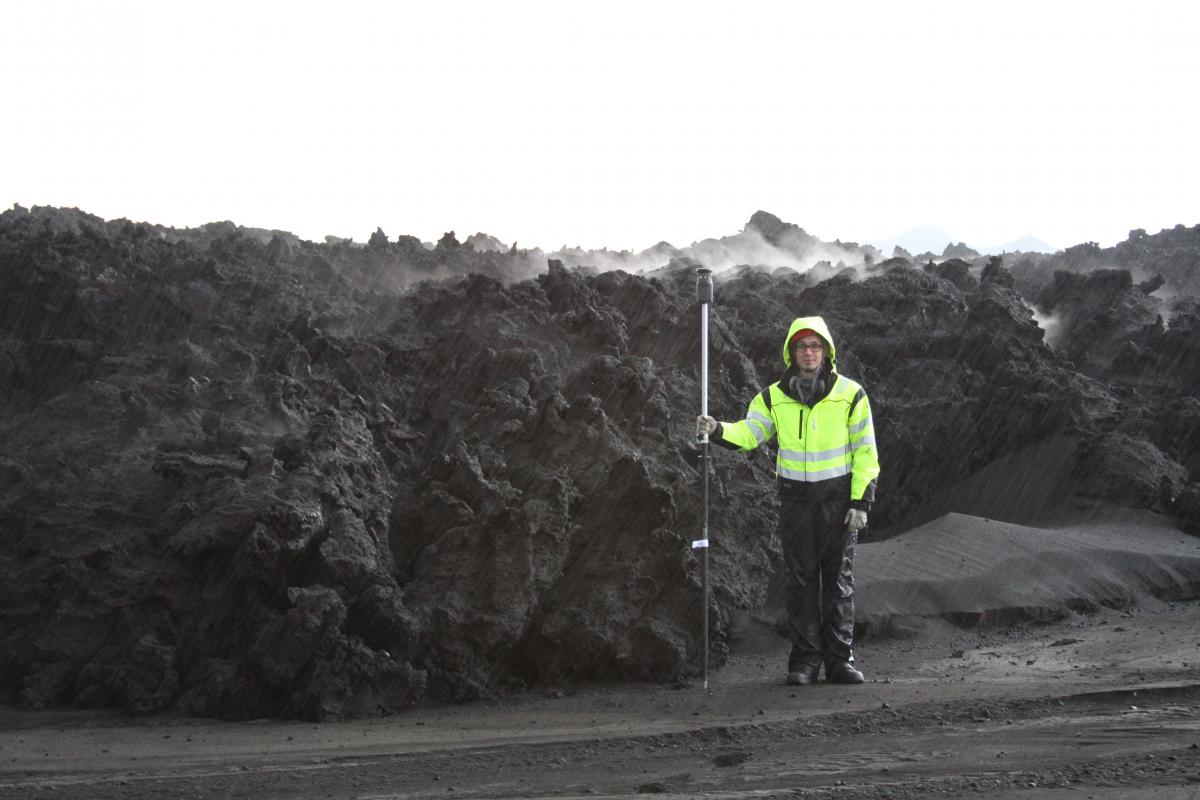 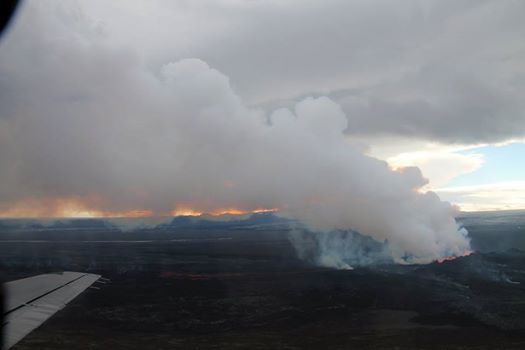 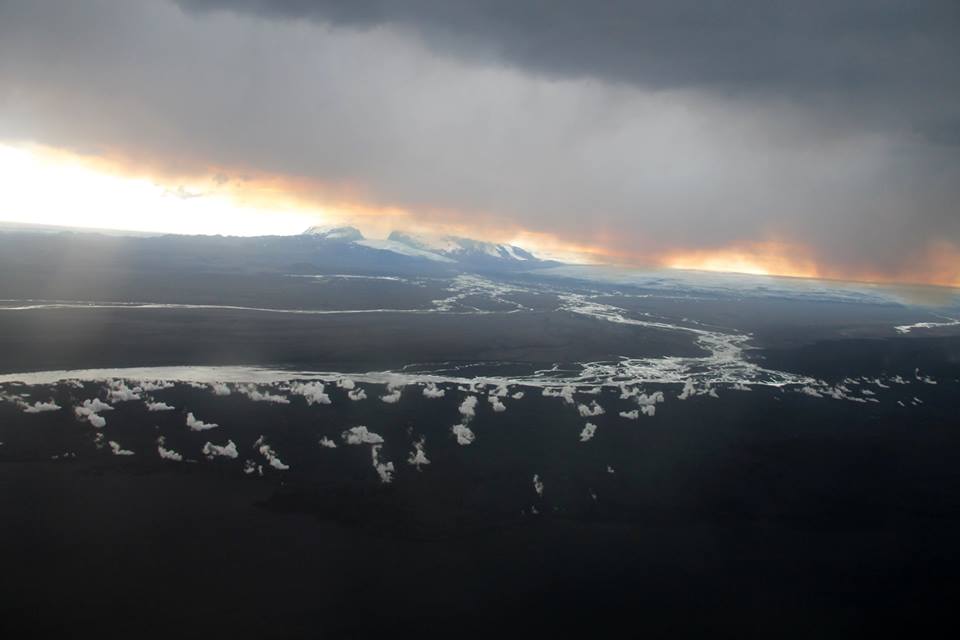 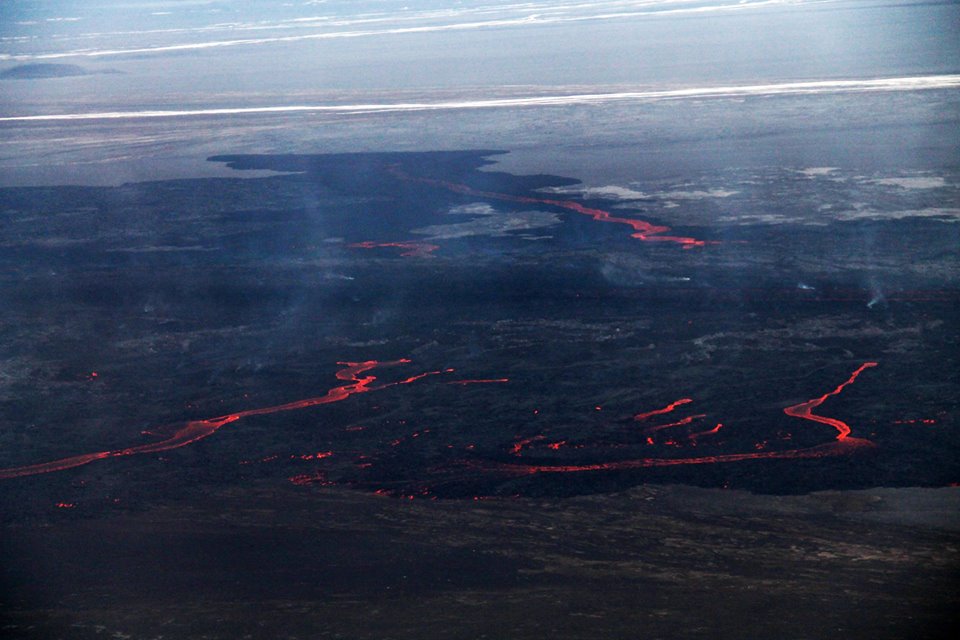 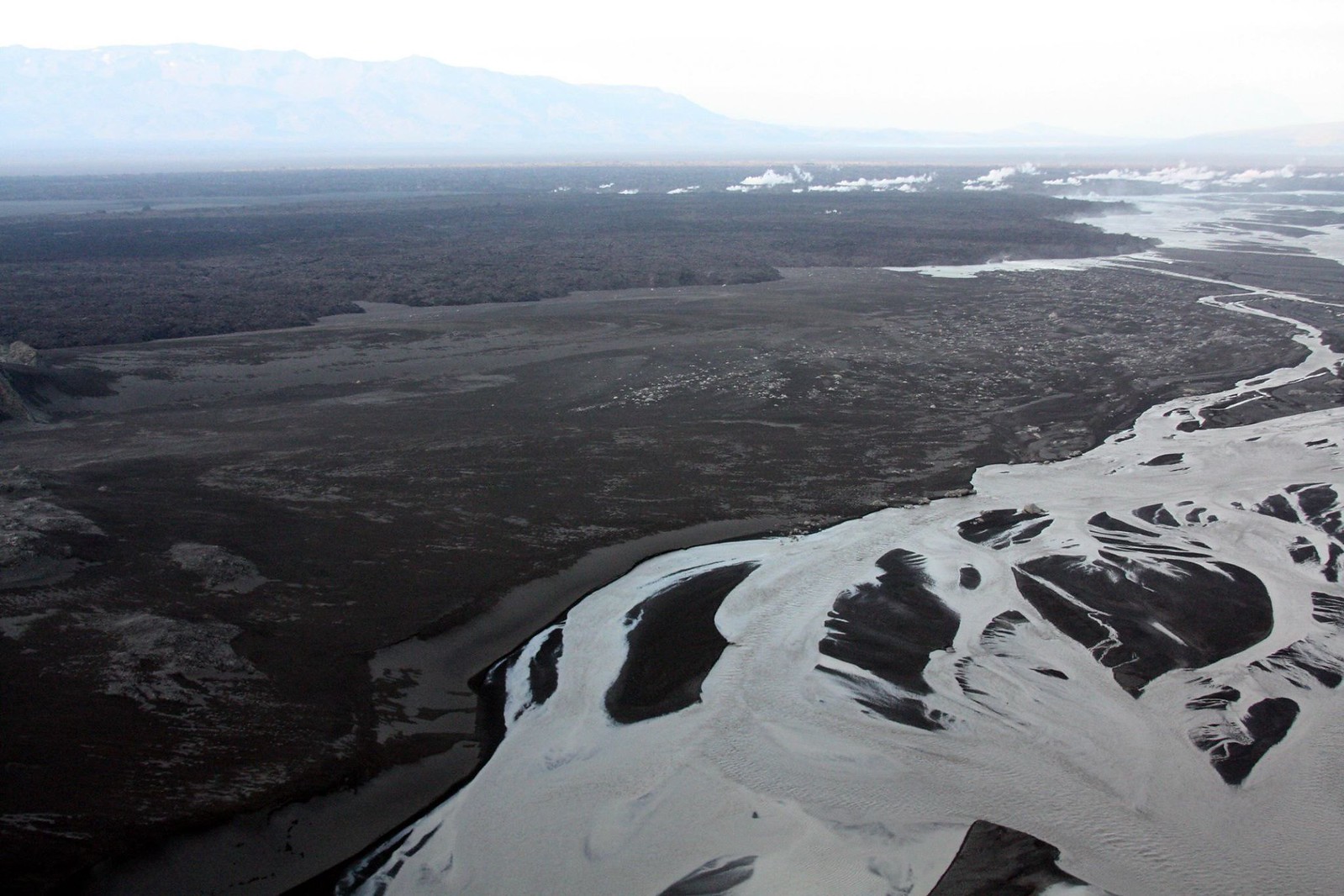 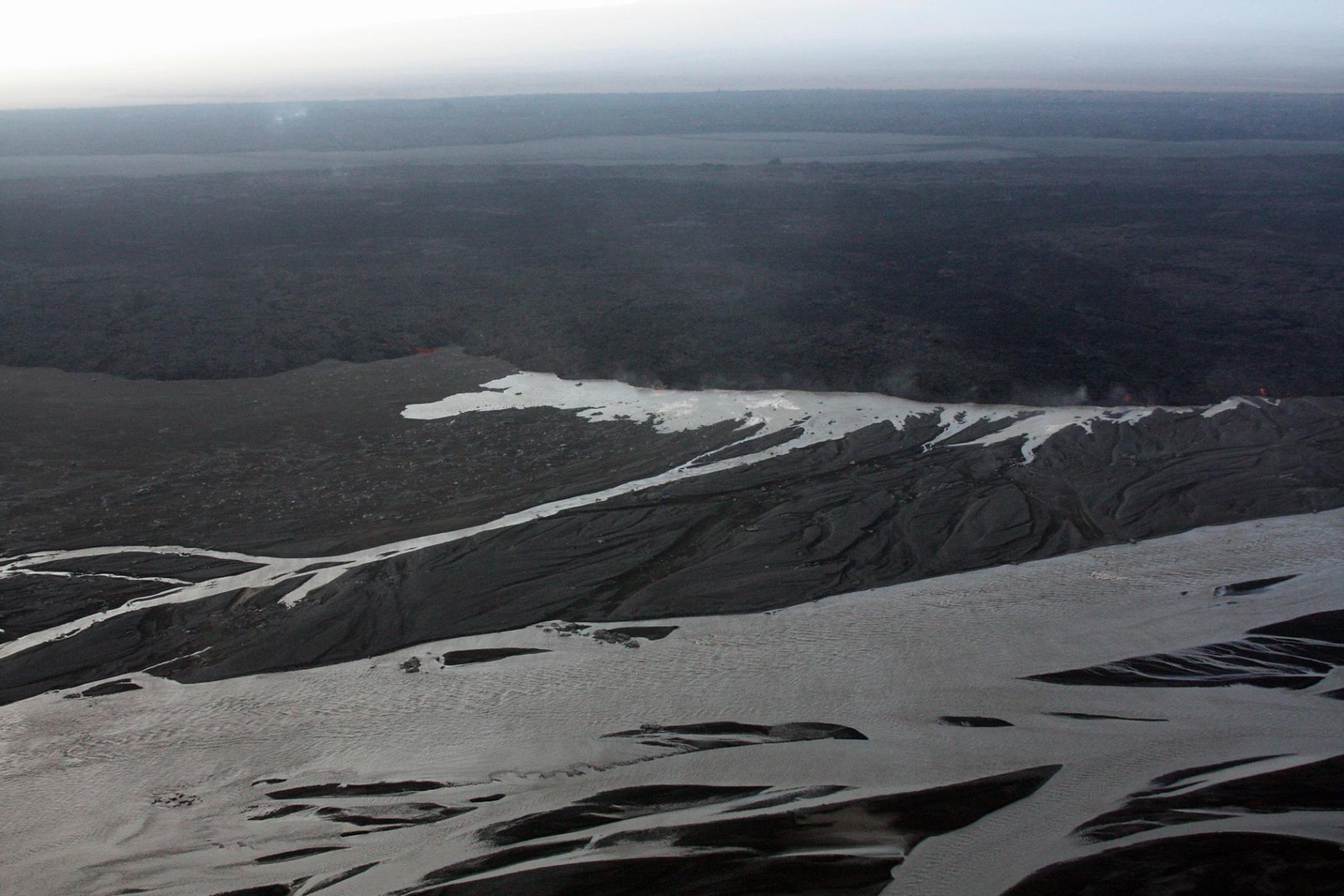 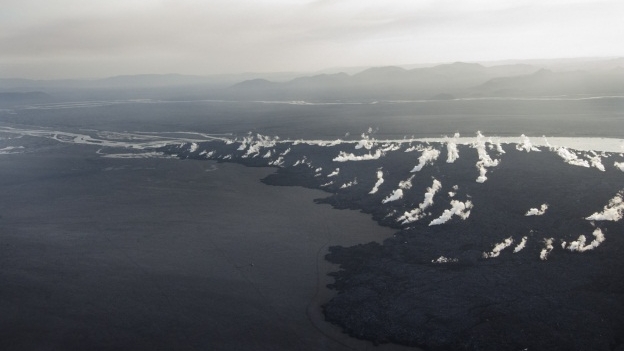 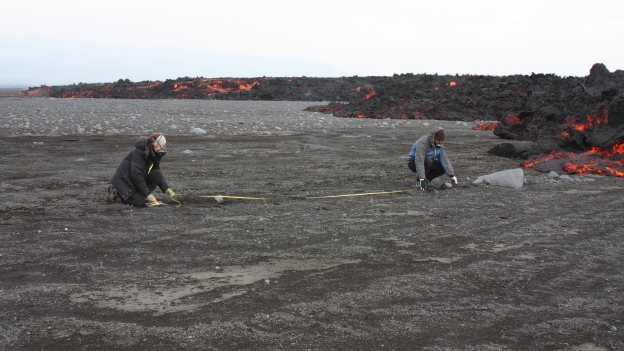 This video was recommended in the comments section of the last article (thanks, trkingmomoe!) and gives a nice sense of the scale of the ongoing lava eruption:

Once again, a reminder: 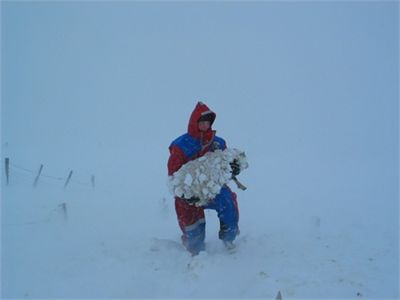 Our ongoing fundraising drive for the volunteers over at ICESAR ends in only two days. If you haven’t yet made a donation as part of our Daily Kos Styrktarátak Slysavarnarfélagsins Landsbjargar, now’s your chance 🙂 And of course, a reminder that there’s going to be two Icelandic goodie packs of your choosing, one to the highest single donor (currently still at $300) and one picked at random, weighted by how much everyone has donated.

If you can, drop me a line either in the comments, a private message, or at meme05@eaku.net so I can register the donation. 🙂 Also, as per tradition, adding $0.01 at the end of the donation helps earmark it as part of this fundraising drive.