One thing I love about the present time is how SO many people are aware. So many people have awakened or are in the process of doing so. Those who have been doing this for decades are no longer feeling like lone voices in the wilderness of colonized post industrial dystopian society.

So much that got me labeled as crazy, ignored, mocked, shunned etc for most of my life has now become central to global intellectual discourse. People are coming together to learn, grow and actively solve the truly huge problems facing humanity and our beautiful planet.

I’m so grateful! It’s also a novel but wonderful feeling to be a part of the zeitgeist, thinking about and discussing the same range of issues and ideas.

I bet a lot of you are also feeling this sense of amazement and relief- “I’m not alone!”. We are all facing these big problems together.

I have long appreciated Charles Eisenstein’s perspective and writing. I think his essay today is particularly relevant to the theme of Spirit In Action.

I started this blog to share my perspective that spiritual growth and political activism are both necessary but not sufficient to solve the vast mess our species currently faces.

I hoped others would appreciate the idea. I also hoped I would meet people who share this perspective, which seemed somewhat unpopular with both groups(spiritual seekers and political activists), except for Starhawk, ReClaiming Covens, a lot of Native activists, and a scattering of others from various other groups.

I believe that when enough people act decisively on both sides (ie personal/internal spiritual work along with political activism, collective action) the seemingly intractable problems of our age will rapidly become solvable.

If you search for Charles Eisenstein on this blog there is a link to his book Sacred Economics free to read online, or download. A full internet search on him should provide a veritable feast of interesting stuff.
Blessings,
ohnwentsya

Thank you! Both the image and the words are beautiful.

The more we focus and Live
with Love And Goodness by our sides
the less room will be
for the dark to exist in our Lives.

So many bloggers and readers in the blogosphere are here because we want to help build a better world (” a world that works for everyone”). I believe that one of the best ways to do that is to develop an intimate and thorough understanding of the worlds that came before this one, and how this greed driven catastrophic mess came about.

First Nations in Canada and indigenous societies worldwide represent what I call “the elder cultures”. By this I mean the cultures that grew up, that existed in most cases for thousands of years-sometimes for many thousands of years. These people adapted not only to their physical environments but to the spiritual environment and the human temperament. They understood how people are and why so the psychological and moral structures of these elder cultures are very effectively designed to manage humans problems both human problems of behaviour and adaptive problems due to environmental instability and change.

We’ve had all that stolen from us by the insidious process of colonization. Luckily for us, the elder cultures most successful at resistance to colonization are still here-they haven’t been erased and paved over with lies, half truths and disinformation-despite ongoing attempts to do so!

Exhibits like this are a precious resource not only for learning about the people whose land you are living in and on, but for starting to learn how to live successfully. Colonized culture-otherwise known as modern, mainstream or “western culture” does not teach us or even allow us to live successfully. It’s designed to create and perpetuate human dysfunction.

For those who live near Vancouver, and everyone who can travel this should be a really fascinating exhibit. For the rest of us, there is also a blog that can be found at the link below.
Blessings,
ohnwentsya

c̓əsnaʔəm: The City Before The City | Museum of Vancouver

The Museum of Vancouver (MOV) connects people with the city, people with ideas, and people with each other. The MOV also explores the continuous transformations of our city. Vancouver has grown up on unceded Coast Salish territory. It is therefore fitting that an exhibition featuring c̓əsnaʔəm, an important ancestral village of the Musqueam First Nation, be the first story of our Vancouver history galleries. c̓əsnaʔəm, known to archaeologists variously as the Eburne Midden, Great Fraser Midden, and Marpole Midden, recently made headlines when ancient burials were uncovered through urban development and the Musqueam strove to protect them. This collaborative project aims to generate public discussions about heritage and Indigenous history, and to raise awareness of the significance of c̓əsnaʔəm for the Musqueam people and for Vancouver.

The curatorial premise of this project is simple: the bone, stone, and shell objects from c̓əsnaʔəm, which have survived thousands of years, are great catalysts for conversations about the relationship between Indigenous and settler societies in Vancouver. They are reminders of the connections between the history of colonialism, and the continuum of Musqueam culture. During the 1920s and 1930s, the Art, Historical and Scientific Association of Vancouver (MOV’s predecessor) undertook excavations at the Marpole Midden and removed over 1,500 “artefacts” for the museum’s displays, discarding others. The presence of these objects or “belongings” as this exhibition calls them since they were, in fact, personal possessions and ancestral remains in the museum’s collections point to an unsettling history. The museum constructed a story about Vancouver’s past that distanced and excluded the Musqueam, viewing the village as an ancient forerunner to Vancouver instead of as a place of ongoing significance to Musqueam. This exhibition re-examines the historical collection and display practices of the museum itself within this context of colonialism.

The exhibition asks, whose home is Vancouver? How have newcomers claimed Vancouver as their own? How do the Musqueam understand their lengthy connection to this place? Generations of families have lived at c̓əsnaʔəm and other areas in the territory for thousands of years. The exhibition evokes this concept of home through design components that reference a Coast Salish longhouse: a site of residence as well as of political, economic, and ceremonial activities. For the Musqueam, home is much more than a physical space; it is what connects individuals to a much broader web of family relationships and territory.

Oral traditions and Indigenous languages are a central vehicle of cultural expression and identity and play an important role in the exhibition. Visitors are invited to pronounce hən’q’əmin’əm’ words, view an animated version of a Musqueam story, and “meet” several community members through a series of recorded interviews. Displays incorporating 3D digital modelling allow visitors to visualize the context in which cultural objects were used. Visitors can also participate in association games and activities designed for families. Throughout this exploration, visitors are invited to reflect upon Vancouver’s history. As Musqueam cultural advisor Larry Grant explains, “c̓əsnaʔəm: the city before the city aims at ‘righting history’ by creating a space for Musqueam to share their knowledge, culture and history and to highlight the community’s role in shaping the City of Vancouver.” 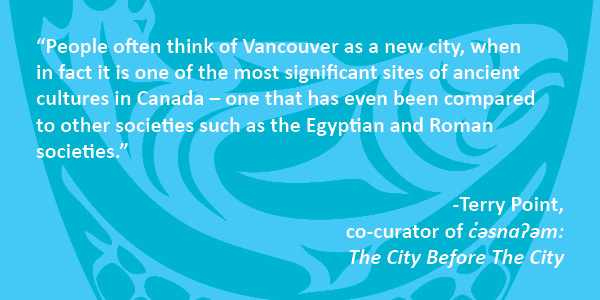 To watch the video, or read the rest of this article, please click the link below the text. I wanted to share this because we see the opposite so much more in the news-and of course we *should* see it until it is changed.

But it does no one any good to demonize or prejudge any group of people. We have to stay open to the positive possibilities inherent in the humanity of those who are in positions of power. We have to keep the positive examples in mind alongside of the monsters to keep our own hearts open.

I have personally met plenty of jerks from police officers to politicians and every power level in between-but I have met a lot MORE of all professions who were like this officer.

Love is our natural state. Cruelty, racism, violence are all dysfunctional. They only arise in broken people.

When we no longer have to protest the insane violence at all levels of our society because THIS behavior has become standard; then the Shift will be evident to all.

Bless this man and everyone like him who continues to act from love in spite of the cultural programming toward fear.
ohnwentsya

That’s what the Michigan police officer said after purchasing a booster seat for a 5-year-old girl who was riding without a car seat.

This instance of gift-giving began as an ordinary traffic stop. Last Friday, Emmett Township Department of Public Safety Officer Ben Hall stopped a vehicle in the southwest Michigan community after someone reported there was a young child riding without a car seat. Alexis DeLorenzo and her daughter weredriving in the car of a friend who was at the wheel.

What is your social class? Take our quiz to find out!

When they were stopped, Ms. DeLorenzo grew worried. She thought they were going to get a ticket. She told the officer she had recently fallen on hard times and could not afford a seat for her daughter. Her car had been repossessed with her daughter’s booster seat still inside, Fox 17 News reports.

Instead of writing the woman a ticket, Officer Hall told her to meet him at a Walmart in 15 minutes. There, he bought a booster seat for her daughter. The act “changed my life,” DeLorenzo said. “I’m never going to forget him. And neither will my daughter.”

In an interview, Hall explained how it felt natural to go beyond the call of duty and make a difference in these people’s lives. His words also expressed humility – anybody in his same position would have done what he did, he said.

“A ticket doesn’t solve the situation,” Hall told Fox 17 News. “What solves it is the child being in the booster seat like she should be.”

(To read the rest, or watch the video, please click the link below