(This article has lots of videos. Please click the link below the article to view them in the original post on Daily Kos. This is only the introduction-there is also more text along with the videos. )

That tricksy volcanic system – waiting for us to fall asleep before giving us a new, bigger eruption! For last night light once again appeared on the webcams pointing at Holuhraun, where the large magma dike has been fracturing the surface as a side effect of its swelling with magma. And this time, it’s an order of magnitude larger.

More details, plus pictures and videos, below the fold on today’s edition of Eldfjallavakt! 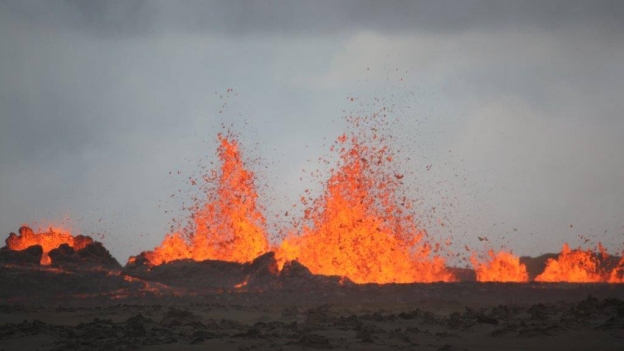 Around 5 AM local time asecond surface lava eruptioncommenced on Holuhraun. The new eruption is positioned to the north of the previous one and is larger. Its length is estimated at 1 to 1.5 kilometers long versus 600-1000 meters for the previous eruption. The southern end is about the same distance from the glacier, while the northern end stretches further north. The lava fountains are estimated at 60 meters high and most importantly the lava flow is estimated to be 50 times that of the previous eruption. 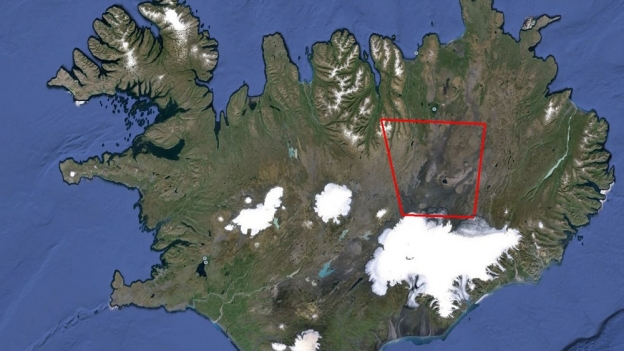 Instrument-only flight has once again been banned over the region up to 6000 feet due to the risk of the eruption accelerating to an explosive phase, although there are no signs of that at present. This time, the flight ban does not include Akureyri, which is good. It’s not expected to have an impact on commercial aviation. There have been delays last night, but these were due to the remnants of Cristobal, who has been giving us a better storm than your typical post-hurricane does and made me have to rush out last night to build a windbreak around my plants..

Here’s a video of the eruption, taken during a brief gap in sandstorms: 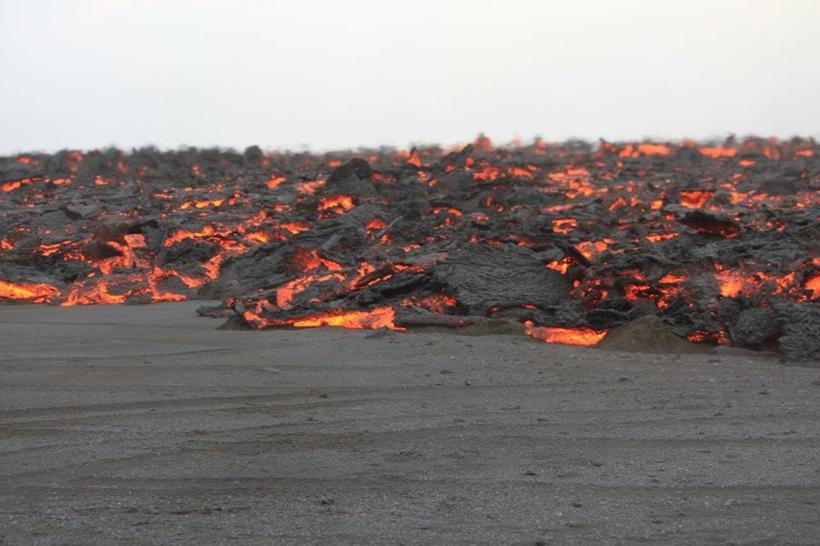 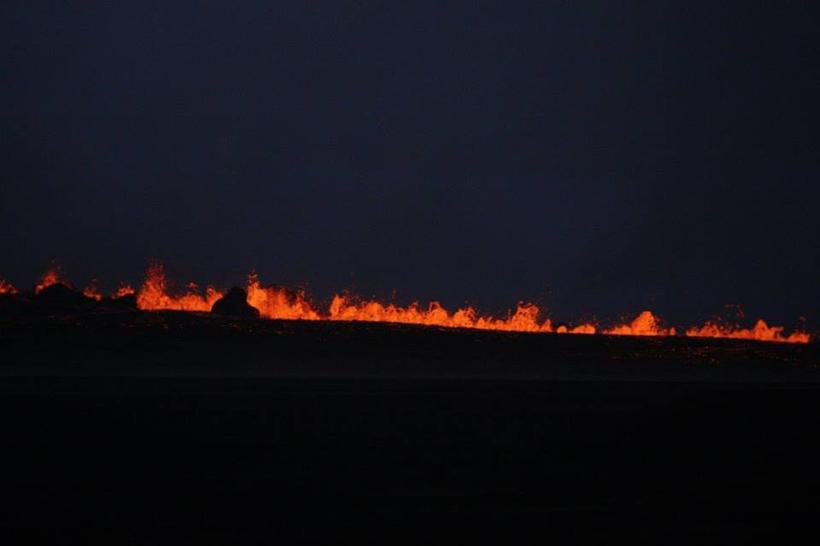 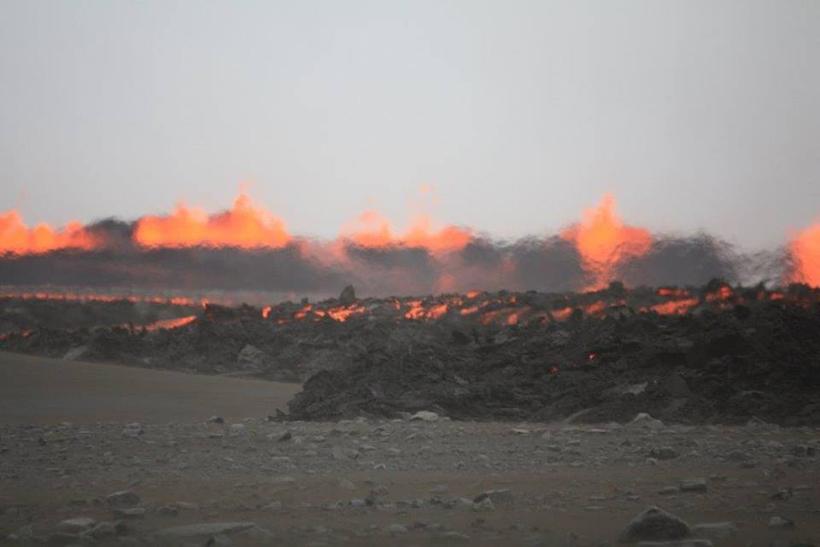 Here’s some closeups of the lava from yesterday’s eruption, before the new one began:

As for the significance of this latest eruption: it’s magnitude at present appears to be faster than the rate of influx, so it could actually (unlike the previous eruption) let off a bit of pressure. However, most eruptions lose steam over time, so we’ll have to see how it progresses. The rate of flow in this eruption is about 1000 cubic meters per second, the flow rate of a reasonably large river. There are no signs of a decline at this point in time.

The concerns at this point are whether it spreads, either south into the glacier where it could cause a flood, or northward toward Askja where it could risk interactions with that system. Really, an ideal situation would be a large lava eruption or series of large eruptions exactly in this location, no further south, and no further north, until the influx dies down.

This eruption is a direct consequence of the continual widening of the rift under Holuhraun. The dike has not been lengthening for several days, simply widening instead. The more the spreading in this location, the easier eruptions here become.

As mentioned in the article yesterday, we’re also watching a lesser quake swarm under Herðubreiðartögl, east of Askja. This location was home to an earthquake swarm earlier this year; the fact that it has resumed suggests that this area is dealing with significant spreading forces as well. I have no information as to the significance of this on the area between the eruption/dike and Herðubreiðartögl. The “area between them” including Askja herself.

If one wants to compare to the Krafla Fires in terms of there being steady uplift, spreading, long-range dikes, lava flowing from rift eruptions, etc, and take the Bárðarbunga caldera activity out of the picture and treat it as a totally separate event – fine, that’s a fair comparison. But when you say that “it reminds me of the Krafla Fires”, as some people have done, it leaves the public with the impression that the magnitude of the event is the same as the Krafla Fires. But nothing about what we’ve been seeing here – quake rate, quake magnitude, tremors, rate of uplift, rate of spreading, influx rate, and on and on – is the same as the Krafla Fires, it’s all far more powerful. In Krafla, the estimated influx rate of magma from the deep reservoirs was 5 cubic meters per second; here it’s estimated on the order of500. And this is a much more dangerous region.

That said, if we’re lucky, perhaps the dike may yield just a “mega Krafla Fires” over the coming months, years, or more, not advance any more (even though the Krafla Fires were defined by regular dike intrusion), and take that element of the picture. But we still better hope that none of the activity in either Askja or Bárðarbunga that’s been happening doesn’t add some color to the scene.

Update, 14:30 31 august: I just realized that I haven’t posted a webcam link in a while. So here you go. 🙂 Again, be aware that there’s bad weather right now.

Update, 19:00 31 august: The eruption, which has been described by people on the site as looking like a glowing dragon, continues unabated. Lava fountains are now reported up to 70 meters high. Here’s a video from on-site:

(Please click the link below to read full article at Daily Kos, and view multiple videos)

If you are a lightworker, starseed, or have spent much time working toward ascension for yourself and the Earth- you will probably want to read Denise’s latest post.

I’ve long been aware that Denise has developed a deep level of skill in discerning and clarifying energetic realities and events and their meanings and effects on us.

She often has very similar experiences to my own-but I don’t always understand very clearly until after I read her discussion of them.

I imagine this may be true for some of you as well. We each have developed different skills, abilities and areas of interest that we can contribute to the collective. It is very inspiring to me reading Denise, Aisha, Brenda and others who help us perceive and understand the changes so much more clearly than we might each do separately.

Aside from the obvious benefit of their wisdom itself, it reminds me to keep working on my own skills and abilities that can also help others. Instead of feeling overwhelmed by the vastness of all that still needs doing, I’m inspired by the possibilities when so many of us work together.

As always, I post this with gratitude to Denise for all of her work, and to each of you too for walking your paths and not giving up.
Blessings,
ohnwentsya