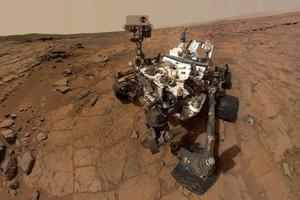 This photo released by NASA shows a self-portrait taken by the NASA rover Curiosity in Gale Crater on Mars.

NASA FileEvidence of water on Mars:Check. Organic chemistry in rock formations: Check. Methane in the atmosphere:Check. And now, fossils? Too soon to tell.

The journal Astrobiologyrecently published a paper that examines Martian rock structures photographed by NASA’sMars rover Curiosity that look strikingly like structures on Earth that are known to have been created by microbes. The paper’s author, Old Dominion University geomicrobiologist Nora Noffke, has studied microbially induced sedimentary structures, or MISS, on Earth for 20 years, even finding evidence of 3.48 billion year old MISS in the Western Australia’s Dresser Formation. The outcrop on Mars is about 3.7 billion years old.

Is this proof of life on ancient Mars? No. But Noffke’s research takes the search to a new step, especially in light of the recent detection of methane and other organic molecules on Mars. Chris McKay, a planetary scientist at NASA’s Ames Research Center and an associate editor of the journal Astrobiology, offers his thoughts on why this development is significant.

Are you a space whiz? Take our quiz!

“I’ve seen many papers that say ‘Look, here’s a pile of dirt on Earth,’” writes Dr. McKay. “‘And because they look the same, the same mechanism must have made each pile on the two planets.”

He continues: “That’s an easy argument to make, and it’s typically not very convincing. However, Noffke’s paper is the most carefully done analysis of the sort that I’ve seen, which is why it’s the first of its kind published in Astrobiology.”

Mars and Earth shared similar early histories, with Mars probably being a much warmer and wetter planetbillions of years ago than it is today. Gillespie Lake, the part of a dry lakebed on Mars where the structures were found, endured seasonal flooding, a hypothetically perfect situation for microbes to thrive.

On Earth, shallow bodies of water contain colonies of microbes that trap and rearrange sediments into identifiable structures. These structures can be found across the Earth in a variety of formations and types, such as pockets, domes, erosional remnants, roll-ups, chips, pits, and cracks.

“All I can say is, here’s my hypothesis and here’s all the evidence that I have,” Noffke said in Astrobiology Magazine, “although I do think that this evidence is a lot.”Noffke discusses next steps to provide proof for her hypothesis, but technology has not yet reached this stage. One important step includes bringing samples to Earth for in depth analyses, an unfeasible task. Or, better technology could be developed to enable deeper, more precise analyses of sedimentary samples on Mars.

“At this point, all I’d like to do is point out these similarities,” Noffke adds. “Further evidence must be provided to verify this hypothesis.”