This undated handout photo provided by Marinelifephotography.com shows Soft corals, crinoids and associated reef fishes in Southeast Sulawesi, Indonesia. A new study on the timing of climate change calculates the probable dates for when cities and ecosystems across the world would regularly experience never-before-seen hotter environments based on about 150 years of record-keeping. These are the dates when every year is hotter than old hottest annual record. This means the old blistering heat of people’s memories will eventually seem unusually cool in comparison to the warming years to come. Coral reef species are the first to be stuck in a new climate that they haven’t experienced before and are most vulnerable to climate change, Mora said. Coral reefs will be in that new regime around 2030. (AP Photo/Keoki Stender, Marinelifephotography.com)WASHINGTON (AP) — Starting in about a decade, Kingston, Jamaica, will probably be off-the-charts hot — permanently. Other places will soon follow. Singapore in 2028. Mexico City in 2031. Cairo in 2036. Phoenix and Honolulu in 2043.

And eventually the whole world in 2047.

A new study on global warming pinpoints the probable dates for when cities and ecosystems around the world will regularly experience hotter environments the likes of which they have never seen before.

And for dozens of cities, mostly in the tropics, those dates are a generation or less away.

“This paper is both innovative and sobering,” said Oregon State University professor Jane Lubchenco, former head of the National Oceanic and Atmospheric Administration, who was not involved in the study.

To arrive at their projections, the researchers used weather observations, computer models and other data to calculate the point at which every year from then on will be warmer than the hottest year ever recorded over the last 150 years.

For example, the world as a whole had its hottest year on record in 2005. The new study, published Wednesday in the journal Nature, says that by the year 2047, every year that follows will probably be hotter than that record-setting scorcher.

Eventually, the coldest year in a particular city or region will be hotter than the hottest year in its past.

Study author Camilo Mora and his colleagues said they hope this new way of looking at climate change will spur governments to do something before it is too late.

“Now is the time to act,” said another study co-author, Ryan Longman.

Mora, a biological geographer at the University of Hawaii, and colleagues ran simulations from 39 different computer models and looked at hundreds of thousands of species, maps and data points to ask when places will have “an environment like we had never seen before.”

The 2047 date for the whole world is based on continually increasing emissions of greenhouse gases from the burning of coal, oil and natural gases. If the world manages to reduce its emissions of carbon dioxide and other gases, that would be pushed to as late as 2069, according to Mora.

But for now, Mora said, the world is rushing toward the 2047 date.

“One can think of this year as a kind of threshold into a hot new world from which one never goes back,” said Carnegie Institution climate scientist Chris Field, who was not part of the study. “This is really dramatic.”

Mora forecasts that the unprecedented heat starts in 2020 with Manokwa, Indonesia. Then Kingston, Jamaica. Within the next two decades, 59 cities will be living in what is essentially a new climate, including Singapore, Havana, Kuala Lumpur and Mexico City.

By 2043, 147 cities — more than half of those studied — will have shifted to a hotter temperature regime that is beyond historical records.

The first U.S. cities to feel that would be Honolulu and Phoenix, followed by San Diego and Orlando, Fla., in 2046. New York and Washington will get new climates around 2047, with Los Angeles, Detroit, Houston, Chicago, Seattle, Austin and Dallas a bit later.

Mora calculated that the last of the 265 cities to move into their new climate will be Anchorage, Alaska — in 2071. There’s a five-year margin of error on the estimates.

Unlike previous research, the study highlights the tropics more than the polar regions. In the tropics, temperatures don’t vary much, so a small increase can have large effects on ecosystems, he said. A 3-degree change is not much to polar regions but is dramatic in the tropics, which hold most of the Earth’s biodiversity, he said.

The Mora team found that by one measurement — ocean acidity — Earth has already crossed the threshold into an entirely new regime. That happened in about 2008, with every year since then more acidic than the old record, according to study co-author Abby Frazier.

Of the species studied, coral reefs will be the first stuck in a new climate — around 2030 — and are most vulnerable to climate change, Mora said.

Judith Curry, a Georgia Institute of Technology climate scientist who often clashes with mainstream scientists, said she found Mora’s approach to make more sense than the massive report that came out of the U.N.-sponsored Intergovernmental Panel on Climate Change last month.

Pennsylvania State University climate scientist Michael Mann said the research “may actually be presenting an overly rosy scenario when it comes to how close we are to passing the threshold for dangerous climate impacts.”

“By some measures, we are already there,” he said.

Seth Borenstein be followed at http://twitter.com/borenbears 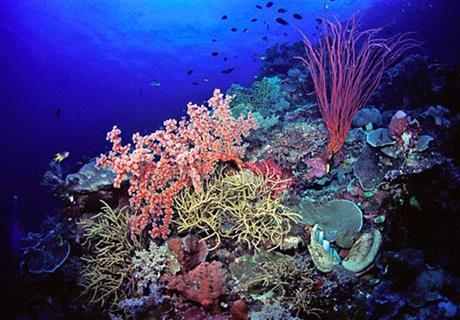